How do I monitor the bilge with Maretron equipment? 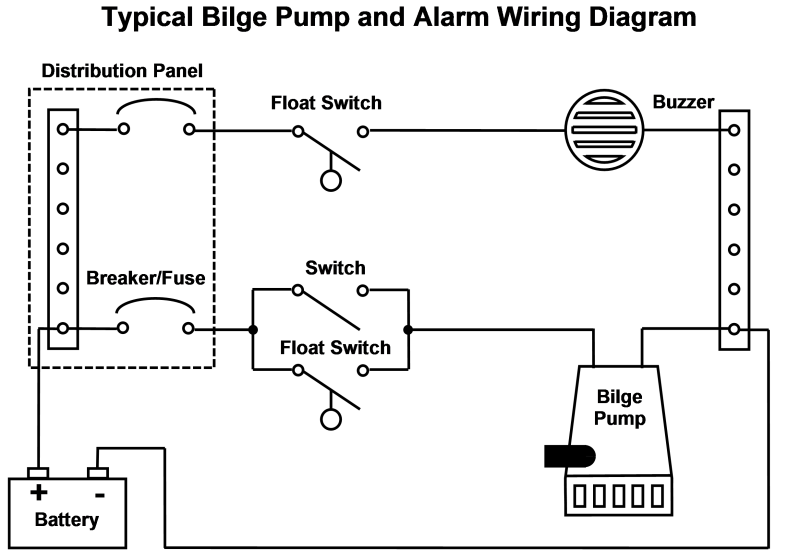 Figure 2 shows the same wiring diagram, but this time with Maretron equipment for monitoring the bilge pump. 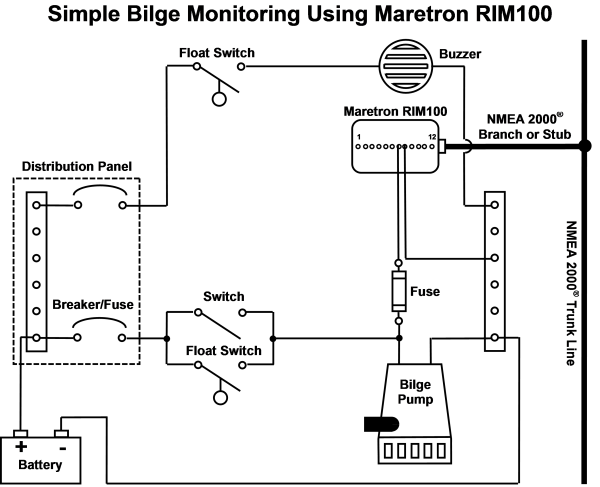 Notice the bilge pump is hooked to one of the six channels available on Maretron's Run Indicator Module (RIM100). Whenever the battery voltage is applied to the bilge pump, whether it be from the float or manual switch, the RIM100 will see the voltage applied to the pump and the RIM100 will send a corresponding message over the NMEA 2000 network indicating that the pump is energized. Note the fuse placed between the pump and the RIM100, which is only required if the sensing wire is a smaller gauge wire than the pump feed wire. Monitoring the bilge pump is important because it gives you an understanding of what's happening in the bilge. With the circuit shown in Figure 1, you probably don't know how many times the pump was turned on, or how long the pump has run, or if the leak is getting worse. If the bilge pump is monitored with the RIM100, then any Maretron display on the vessel can indicate when the pump is on, or an alert can be set if the pump runs for more than a set time. With Maretron's N2KView software, you can graph the bilge pump to see if its running more and more as time passes, you can create digital displays for counting the number times it turns on, or you can create digital displays for accumulating the run time.

Figure 3 shows another wiring diagram, but this time with comprehensive bilge pump and alarm circuit monitoring. All of the monitoring points are not absolutely necessary, but let's walk through them to understand why each point might be monitored.

The first monitoring point to consider is the line side of the float and manual switch. This monitoring point gives us an indication of whether or not the bilge pump circuit is armed and ready to go assuming the water rises high enough to engage the float switch or if the manual switch is turned on. Again, we can use the Maretron display to indicate that the bilge pump circuit is armed. We can also set an alarm within the display such that if the breaker trips or fuse blows, we will get an immediate indication that the bilge will not be pumped if the need arises.

The second monitoring point to consider is the buzzer. The primary reason for installing the buzzer is to provide a backup system and an indication that the bilge circuit isn't working or perhaps the bilge pump is overwhelmed. Whatever the reason, it is essential to inform someone before things escalate out of control. Using the RIM100 to monitor the buzzer, a message is immediately sent out over the network if the float switch energizes the buzzer. An alert within the displays can be programmed to sound any number of annunciators (Maretron ALM100's) connected to the NMEA 2000 network and strategically placed around the vessel. The alert messages can be picked up by Maretron's text messaging box (SMS100) that is connected to the NMEA 2000 network so numerous people can be notified of the problem via text messages. If Maretron's N2KView software is used and properly configured and connected to the Internet, several people can receive an email indicating the problem.

Finally, we show a diagram (Figure 4) where the float switch and buzzer are replaced with a Maretron Switch Indicator Module (SIM100). This circuit still provides for the safety backup using a Maretron Bilge High Water detector (BHW100), but it moves the buzzer function together with all the other alarms on the vessel into a central alarming system. The central alarming system simplifies the way captains and crew figure out problems onboard. Instead of different buzzers coming from different places and different systems, there is a single common interface showing all warnings and alarms.