Is it possible to wire a manual override switch around the DCR100?

Yes, you can use a manual switch to override the DCR100. Please see the attached diagrams which shows three different circuit configurations.

The first circuit diagram shows how the DCR100 is wired into a circuit without any type of manual override. With this configuration, the light is controlled by the Solid State Relay (SSR) within Maretron's DCR100. The light is switched on through NMEA 2000 commands coming from Maretron's dedicated display (DSM150 or DSM250) or Maretron's vessel monitoring and control software (N2KView). One issue with this configuration has to do with removal of NMEA 2000 power from the DCR100, which causes the SSRs within the DCR100 to turn off. Please refer to the second and third diagrams for getting around the problem where NMEA 2000 power is removed from the DCR100 and all channels turn off. 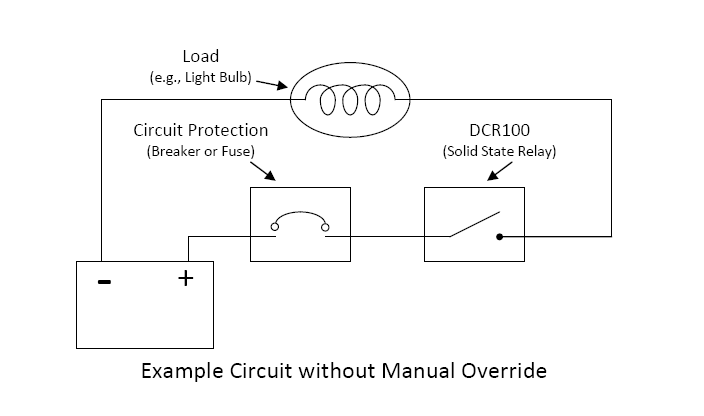 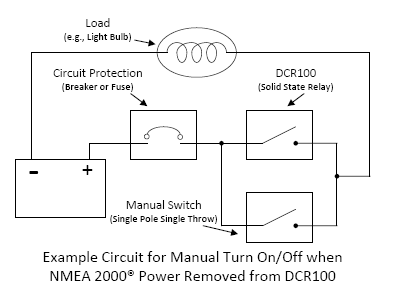 The third diagram shows a Double Pole, Triple Throw (DP3T) switch added to the circuit. This switch allows the DCR100 to work in its normal mode under control of the NMEA 2000 network (Auto or center position), or the switch can be used as a manual override (On or Off positions) completely independent of the DCR100.

Under normal circumstances, the first circuit diagram is all that is required. If you want to be able to shut down the NMEA 2000 network but still have manual turn On and Off capability, then the second diagram should be adequate. For systems where it is imperative to be able to turn On and Off a circuit under all conditions (i.e., failed NMEA 2000 network and/or failed DCR100), then the third circuit diagram should be the choice.